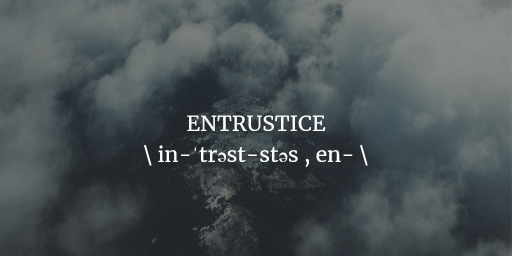 Entrustice: the state of continually putting (something) into someone’s care or protection.

“Then he released Barabbas for them. But after he had Jesus flogged, he handed him over to be crucified. Then the governor’s soldiers took Jesus into the governor’s residence and gathered the whole cohort around him. They stripped him and put a scarlet robe around him, and after braiding a crown of thorns, they put it on his head. They put a staff in his right hand, and kneeling down before him, they mocked him: “Hail, king of the Jews!” They spat on him and took the staff and struck him repeatedly on the head. When they had mocked him, they stripped him of the robe and put his own clothes back on him. Then they led him away to crucify him.”

Have you ever considered the silence in which our Lord endured such torture. Never a vengeful gaze, never a deserved curse passed from His lips. How often I see my guilty children clinch their fist and scrunch their face in rage when they endure their just sentences and declare them unfair. And how often am I quick to protest any circumstance that fails to fall in my own favor.

Jim Caviezel, in his portrayal of Jesus in Mel Gibson’s Passion of the Christ, recounts the difficulties he had in portraying Jesus during those horrific suffering scenes. During the scourging scene, where they shot Caviezel from below and placed a board on his back to receive the severe lashings from the two Roman guards, “broke character” after one of the whip’s throng’s came over the board cutting a 14-inch gash in his back. “I turned around and looked at the guy, and I tell you, I may be playing Jesus, but I felt like Satan at that moment. I turned to him, a couple of expletives came out of my mouth.”1

“It’s one thing to act as Christ, it is another thing entirely to be Him for a single millisecond,” (Tom Nelson). Who of us can truly suffer with such grace as Christ, who willingly gives His back to those who beat Him (Isa 50:6)? Even forgiving the very soldiers (Luke 22:34) who mocked his kingship, spat in his face, nailed his precious hands into wood, and callously gambled away his clothing. “This was infinite meekness and goodness, truly worthy of God’s only-begotten Son; an example of forgiveness which, though it never can be equaled by any, is fit to be imitated by all,” (Benson Commentary).

Brothers, may the Spirit guide us in absolute humility when we encounter situations that seem to weigh against us. May we stop to consider the meekness of our Lord before we call a situation “unfair” and demand justice (on our own behalf), and seek to entrust our lives to the only righteous judge above.