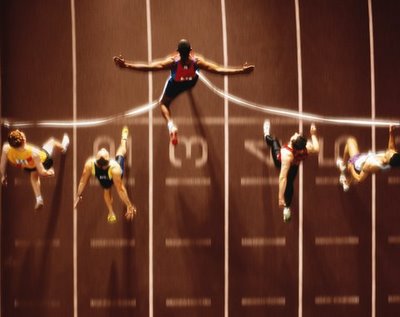 To run to win, we must first run in the right way.  We all know of men that work the career ladder hard, right?  Is that Christian (like Christ)?  Often not, but maybe.  If God assigned us there, revealed this as our territory, and favored us, then yes. In fact, if we don’t progress in the area he has assigned and promoted, we may even be disobedient. Alternatively though, if we are self-promoting, stepping on others, and gaming the system, then this is worldly vs Christ-like.  The worldly designation describes most men; unfortunately it describes some ‘Christian’ men.

So we’ve first got to run the race in the way Christ described and modeled. What does that look like? Surrendered to God’s will (His Kingdom work), with Christ ever before us, trusting in Him, and giving God the glory.  That is a lot right, realistically taking somewhere between 3-30 years to figure out? It took the disciples 3 years and some of us are even slower learners.  But then, for the mature Christian men who are running, and are running right, are we ‘running to win’?   In 1 Corinthians 9:24 Paul says, “Know ye not that those who run in a race all run, but one receiveth the prize? So run, that ye may obtain it.”  Upon first read it sounds a little selfish. If the same gospel of Christ says “the first will be last and the last will be first”, then how is it right to seek the winners circle glory and prize?  Is that humility or servant leadership? For the simplistic mind this seems contradictory, but remember, ‘God is not simple’.

The winner truly desires the prize. In the case of Christian men, the ultimate prize is Jesus. When we run well, we get Jesus. We get His forgiveness, His favor, His nature, His love, His peace, His wisdom, His contacts (the Father and the Holy Spirit) and even some share of delegated rule and reign. We get Jesus in place of what we really deserve, which is Hell.  This is not some minor “pop-one-balloon county fair gimme” prize. It is desirable! It is The Great Pearl prize. It is worth a winning-focus, effort, and passionate life.

If you think of unapologetic winners  the legendary Paul ‘Bear’ Bryant comes to mind quickly.  Talking of himself, the Bear said, “If wanting to win is a fault, as some of my critics seem to insist, then I plead guilty. I like to win. I know no other way. It’s in my blood.”  If wanting Jesus is a fault, then let me be found guilty.  One of the stranger things in the Bible is that God used Jacob to move his will forward.  In his early years, Jacob was a deceiver. He tricked his father and cheated his brother and wrestled with God, but in the end, he bore the name of ‘Israel’.  One thing that Jacob did though; He passionately desired God. He desired a spiritual inheritance and the realization and fruition of God’s promise to His forefathers. Compare this to his brother Esau, who cared nothing for the father’s inheritance.

How are we running? As a person and as a church?  Are we running like we have a great hope and promise? If we are going to run, let’s passionately run as if to win. Run as if to win the great prize – Jesus and a truly amazing inheritance.