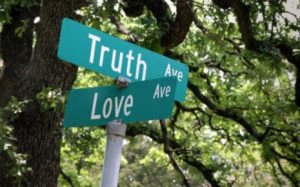 To the elect lady and her children, whom I love in truth, and not only I, but also all those who have known the truth, because of the truth which abides in us and will be with us forever:  Grace, mercy, and peace will be with you from God the Father and from the Lord Jesus Christ, the Son of the Father, in truth and love. –2 John 1-3

Love in truth often refers to “tough love” but even so, it’s no less sincere. John says “not only I but those who have known the truth” referring to the other apostles. John’s love for “her” is not random but born out of the truth which abides in him and will be with him forever. Look closely at the first few verses in your Bible and count the times “truth” is used. John is referring to Jesus which has been taught to them accurately.

Again, false teachers have come to confuse the work of the apostles. Truth will again be a focus of attention as John deals with false teachings. Brothers, though it may sound redundant. False teaching was, is, and will continue to be an issue we must personally combat. Some teachers in our own time question the authenticity of the Word. Some question Jesus’s existence while others simply question His deity. Others come on screen to tell us Jesus wants us to be rich, so we can send in large donation checks to fund their travels on private jets. Too often messages of hyper-grace, or on the other end, legalism come from the pulpit. John brings an immediate focus on “truth”. John sends his greeting to “the elect lady” with grace, mercy, and peace which comes from God the Father and the Son in truth and love.

As we again dive into correcting the erosion of truth by deceivers, move forward men, evaluating your personal perspectives and beliefs against the truth of His precious Word. Our Father loves you and I and gave us an immovable standard for the ages to anchor our hearts to, so that deceptions do not cast us adrift from His heart.