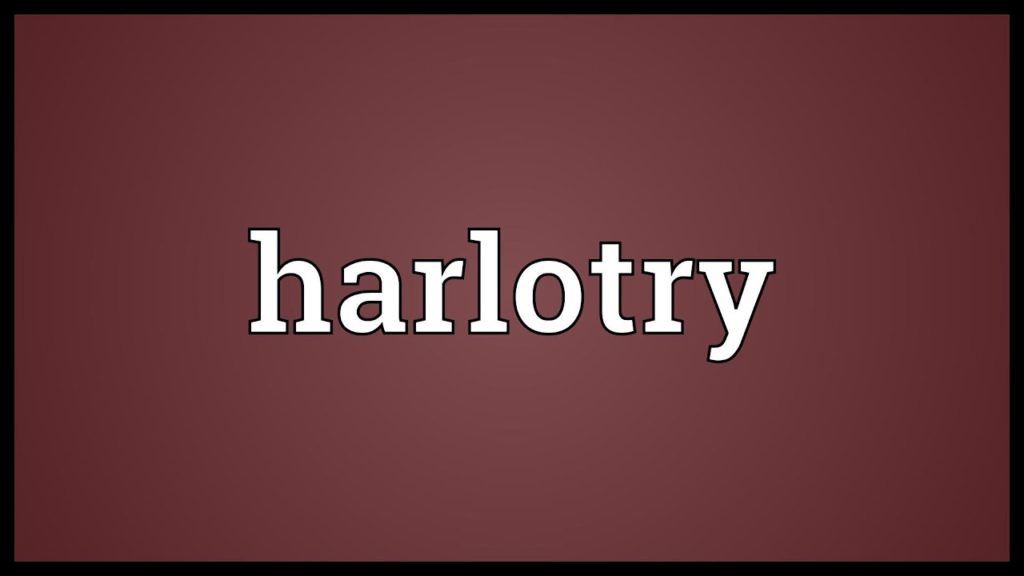 “Behold, therefore, I stretched out My hand against you, diminished your allotment, and gave you up to the will of those who hate you, the daughters of the Philistines, who were ashamed of your lewd behavior. You also played the harlot with the Assyrians, because you were insatiable; indeed you played the harlot with them and still were not satisfied. Moreover you multiplied your acts of harlotry as far as the land of the trader, Chaldea; and even then you were not satisfied.

“How degenerate is your heart!” says the Lord God, “seeing you do all these things, the deeds of a brazen harlot.

“You erected your shrine at the head of every road, and built your high place in every street. Yet you were not like a harlot, because you scorned payment. You are an adulterous wife, who takes strangers instead of her husband. Men make payment to all harlots, but you made your payments to all your lovers, and [c]hired them to come to you from all around for your harlotry. You are the opposite of other women in your harlotry, because no one solicited you to be a harlot. In that you gave payment but no payment was given you, therefore you are the opposite.” — Ezekiel 16:27-34

Men, shrines and “high places” of worship had been erected to various false deities all over Jerusalem. The Lord has called Israel “harlot” and testifies against them. Israel has taken on the deities of the Egyptians, Philistines, Assyrians, and even pursued as far as the Chaldeans, and was still unsatisfied.

The Lord goes on further, saying, Israel was not like other harlots. Other harlots expected something for their services. Israel has given herself away and paid handsomely to be taken advantage of. They will be handed over in part, to the Philistines, who were disturbed at how lewd Israel had become.

Time, and time again, God had delivered Israel from the hand of the neighboring nations that the current generation of this time had simply given herself over to. Israel’s ancestors fought to keep herself pure from these false religions, but now, they chase other gods.

America once fought a world empire for religious freedom, to worship the 1 true God without interference from the state. Today, any religion is accepted except worship of the Lord God. In our appetite for distractions, comforts, tolerance and our piece of the pie, America has forsaken God except for a token of appreciation on Sunday by a remnant.

We too are harlots. We were given a land, and we’ve handed it over to China for cheap gadgets, the Arabs for cheap oil, and Hollywood for our insatiable request for unGodliness. We have given away personal freedom to other nations and lay as harlots on a bed of debt. Convenience and ease has become our god, and the trap has been sprung.

Move forward, men. America has committed sins, and is being called to repentance. What will you do? Who will rescue us from ourselves but the Lord our God through repentance and personal responsibility.

“Moreover you took your sons and your daughters, whom you bore to Me, and these you sacrificed to them to be devoured. Were your acts of harlotry a small matter, that you have slain My children and offered them up to them by causing them to pass through the fire? And in all your abominations and acts of harlotry you did not remember the days of your youth, when you were naked and bare, struggling in your blood.”

“Then it was so, after all your wickedness —‘Woe, woe to you!’ says the Lord God — “that you also built for yourself a shrine, and made a high place for yourself in every street. You built your high places at the head of every road, and made your beauty to be abhorred. You offered yourself to everyone who passed by, and multiplied your acts of harlotry. You also committed harlotry with the Egyptians, your very fleshly neighbors, and increased your acts of harlotry to provoke Me to anger.” — Ezekiel 16:20-26.

Men, Israel has played the harlot with deities of neighboring lands. Worse, Israel has sacrificed her sons and daughters, who should have been raised in the ways of the Lord God, by having them “pass through the fire.” In other words, Israel has taken their children and killed them by burning them in ritual worship to false deities. Israel has built shrines on every street and even played the harlot with Egypt. Not so many generations before, God had delivered Israel from the Egyptians, and made them His people, now they’ve turned back voluntarily to pursue Egypt’s gods.

We would like to think that horrors and indiscretions as these could never happen in our time. We may not consider it worship, but millions of aborted babies “pass through the fire” of incinerators without a thought or care. We may not call it worship, but very real false deities are still getting their sacrifices. Convenience seems to be the image the Lord is conveying as He references shrines on every street. We might say we’re doing well since we have a church on every street. Perhaps so, but we carry access to the shrines of our hearts in our pockets. If we begin to define worship and harlotry as the Lord does, we may find ourselves convicted by what we place emphasis upon, or apply time and energy to.

Yes, we’ve made harlotry more convenient than ever. We can search, copy and paste, send links, and share/ like our harlotry with multitudes a few clicks. We can even upload pictures, reviews and mark the locations of our harlotry with GPS coordinates. Whatever offenses we have committed, the Lord God welcomes us back through repentance.

Many may consider God harsh to judge with such a heavy hand. We may do well to consider how much horror from humanities hand it takes to compel God’s hand to move in judgment.

Move forward men, repenting on behalf of our nation. What have we made convenient in our lives? Would God consider you and me a harlot by the actions He sees us engaged in?