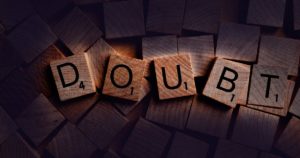 Then the eleven disciples went away into Galilee, to the mountain which Jesus had appointed for them. When they saw Him, they worshiped Him; but some doubted. — Matthew 28:16-17

Men, the women who witnessed an angel at the tomb of Jesus have returned to the disciples. They report what they have seen and conveyed the message, “Go and tell my brethren to go to Galilee, and there they will see Me.” The 11 disciples go to Galilee, to the mountain which Jesus had appointed. When they saw Jesus, they worshipped Him, but some doubted.

The word translated here as “doubted” may better be translated as “hesitated”. Some may have hesitated in wondrous disbelief, others in awe, or concern for how their personal failures may be handled by the resurrected Savior. The text says “they worshipped”, but doesn’t say, “Some worshipped”.

This leads our minds to believe there was an acceptance of His resurrection once each one saw Him, but there likely would have been various responses to Whom they saw. Each person processed the occasion differently, but history would record that each one would be martyred for their belief in Jesus as the Risen Savior.

Our experiences with Jesus through Holy Spirit today also come with a mixed bag of response. Some fall apart in tears as years of hurt fall away. Others take a knee in humble submission to the King of kings. Whatever the response, it is clear, those who seek Jesus with their whole heart, find Him.

How many of us are too busy to go to Galilee? Sunday marks a time when seekers set aside a morning to encounter Him at least in His Word and through fellowship. How many of us fail to be counted? The 11 seen Jesus and worshipped Him. They wrestled with all the various implications, after they sought Him.

Move forward men, seeking Him while He may yet be found. Get off the couch and pursue an encounter. Go to church, open His Word, sign up for a conference, attend an event that facilitates encounters with Holy Spirit, but move toward a place where you may meet Him. He is alive and still reveals Himself to the earnest.

Consider this opportunity: The QuestLife