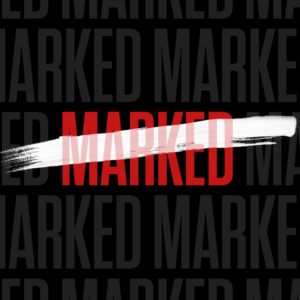 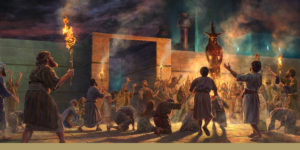 And it came to pass in the sixth year, in the sixth month, on the fifth day of the month, as I sat in my house with the elders of Judah sitting before me, that the hand of the Lord God fell upon me there. Then I looked, and there was a likeness, like the appearance of fire—from the appearance of His waist and downward, fire; and from His waist and upward, like the appearance of brightness, like the color of amber. He stretched out the form of a hand, and took me by a lock of my hair; and the Spirit lifted me up between earth and heaven, and brought me in visions of God to Jerusalem, to the door of the north gate of the inner court, where the seat of the image of jealousy was, which provokes to jealousy. And behold, the glory of the God of Israel was there, like the vision that I saw in the plain.

Then He said to me, “Son of man, lift your eyes now toward the north.” So I lifted my eyes toward the north, and there, north of the altar gate, was this image of jealousy in the entrance.

Furthermore He said to me, “Son of man, do you see what they are doing, the great abominations that the house of Israel commits here, to make Me go far away from My sanctuary? Now turn again, you will see greater abominations.” — Ezekiel 8:1-6

Men, in just over a year, Ezekiel has completed the 430 day event of lying on his side. Now the elders of Israel are sitting in front of Ezekiel inside his home when “the hand of the Lord God fell on” him. Like the first vision, Ezekiel sees the form of a man in the appearance of fire from the waist down and the appearance of amber brightness there upward. The Lord stretched out His hand and took Ezekiel between the earth and heaven to show him Jerusalem, into the door of the north gate of the inner court. There, inside the gate of the inner court an idol had been erected which provoked the Lord to jealousy.

Many scholars believe this idol was of Ashera, a fertility false goddess. Ezekiel does not expand on the practices the Lord drew his attention to in v6. The Lord called it “abominable”. To bow to an idol inside the inner sanctuary of the temple was in itself abominable, but if this were Ashera, there may have been further practices inciting the Lord’s anger. In 1 Corinthians 6, Paul addresses the Corinth church who had allowed sexual sins to pervert the congregation. Paul reminds the people to flee sexual immorality, because the body is the TEMPLE of the Holy Spirit within us.

In Ezekiel’s time, God dwelt in the physical temple, but no longer, He has caused the temple to become desolate, and now dwells in the believing hearts of His children. Now we ask ourselves, if He dwells in our hearts, what are we asking Him to dwell alongside of? Are there idols erected in our innermost hearts that the Lord God must share cohabitation? Will the Lord be provoked to jealousy from within our own hearts?

Move forward men, removing that which is abominable from His temple within our hearts. Ask Him to show us what He sees, to reveal that which needs to be removed, then ask Him to help you surrender it to Him. May the Lord God alone be lifted up within us. He alone is worthy. 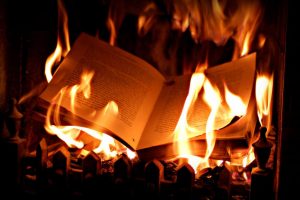 Also many of those who were now believers came, confessing and divulging their practices. And a number of those who had practiced magic arts brought their books together and burned them in the sight of all. And they counted the value of them and found it came to fifty thousand pieces of silver.” –Acts 19:18-19

Contrast this good ol’ fashion book burning with what a man says later about the Christians to angry Ephesian businessmen whose finances have been threatened by the decline in Artemis worship.

“For you have brought these men here who are neither sacrilegious nor blasphemers of our goddess.” –Acts 19:37

The believers of Ephesus apparently remained respectful toward the religions of others. They never succumbed to picketing idol shops or zealous bombings of their clinics. Nor did it seem did they even slander these “so-called gods,” (1Co 8:4-6).

So let us boldly topple idols (Judges 6:25-26) among hearts that have been conquered for God (Deut. 7:5)—especially our own. Idolatry is spiritual adultery (Jer. 3:9; 13:27; Eze. 16:15-22), and we should take seriously God’s warning of life (Deut. 32:47). Therefore, we have great need to severe their hold, and gouge out their influence (Mat. 18:8-9). As Amy Carmichael told the Indian Christians to burn their idols, may we be like those who once practiced magic arts, and so eagerly cast all our former trades and leisure pursuits to the fire of destruction, before these powerless gods weigh us down into captivity (Isa 46:1-2).