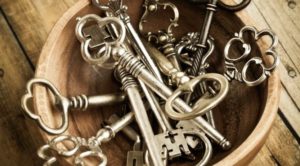 Men, the gates of Hades will not prevail against “the called out ones” of Jesus Christ. Now He tells Peter, “And I will give you the keys to the Kingdom of Heaven”. Matthew 18 later let us know that all the disciples were given “the keys” as well. But what are these keys, what do they unlock, and what is behind these doors?

Let’s define a Kingdom as a territory/realm. Within the borders are protections, privileges, rights, responsibilities, protocols, and authorities. Jesus has come, not to set up a physical kingdom, that comes later, but a Kingdom system which is superimposed over the world system. The world system is governed by the ruler of the air, Satan (Eph2).

Having the keys grants those who have them the authority to act on behalf of Him who granted the keys, namely Jesus. In effect, having the keys grants those with keys authority to overrule the authority of the air, or the system of this world. When the world system is hurling insecurity and fear in our face, these keys grant us access to His peace and power and more. Peter was given keys to preach, and he did so with great affect, bringing in 3000 in Acts 2. Peter opened the door to Gentiles in Acts 10. Peter unlocked the door to healing miracles and more.

So, are these keys available to us? Consider Luke 10. Jesus gave authority to 70 believers to “tread on serpents”. Serpents are demon rulers over territory here in the world. Jesus prayed for “oneness” in John 17. The Kingdom of God which Jesus preached will never fall or fail. Authority granted in Kingdom supersedes all other authority. We can access these keys, but like a Good Father, He waits on some who He can grow into responsible children who will possess the keys with understanding and humility.

Peter, the 12, and those faithful to pursue great depth in their relationship with Jesus have been given “keys to the Kingdom”. Keys grant us access to Kingdom privilege, power and gifts; unlocking opportunities beyond a surface level relationship, and come with responsibility. Jesus tells Peter and the 12 that with keys, they can also “bind on earth” and it “will be bound in heaven”.

In addition, Jesus tells them, “whatever is loosed on earth will be loosed in Heaven”. This is all in context of Kingdom. In this Kingdom, Jesus sits at the right hand of the Father and is judge. Binding and loosing are contractual, judicial, and legal terms. If someone or thing is bound, it is presided over by authority.

For example, the covenants of God, His promises, oaths, agreements and boundaries are binding. Obedience to His precepts and law “loose” specific blessings. If something is loosed, it is freed, unhindered, activated etc. Jesus is telling the 12, and us, that we reciprocate legal business, through the Holy Spirit, with heaven and earth.

There is an active role for Peter, you and I to participate in regarding Kingdom business on the earth. Consider 1 John 5:14-15. We can ask God the Father and Jesus for anything –within His will– and it will be done for us. God sits on His royal throne and issues legal judgments and decrees that are then carried back to the earth and Kingdom business is accomplished. Agreements made here are also binding in Heaven. No wonder Jesus told us not to make oaths. Yes, Jesus is a comforting friend, closer than a brother, He is our defense, but He also holds legal authority with God the Father over all things in heaven and the earth.

Move forward, men, with keys. Jesus called Himself, “the gate”… into the Kingdom. Salvation only takes us into the gate. By walking close with Him, we learn to navigate the system of Kingdom and He grants keys of access to His power. Move forward, men, in obedience to His Word and precepts to function in His will. Consider the legal protocols of Kingdom. Immerse yourself with full surrender in His will and ask of Him. Watch it happen on earth as it is decreed from Heaven.