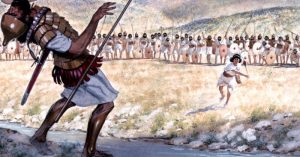 “45 But David replied to the Philistine, “You are coming against me with sword and spear and javelin. But I am coming against you in the name of the Lord of Heaven’s Armies, the God of Israel’s armies, whom you have defied! 46 This very day the Lord will deliver you into my hand! I will strike you down and cut off your head. This day I will give the corpses of the Philistine army to the birds of the sky and the wild animals of the land. Then all the land will realize that Israel has a God, 47 and all this assembly will know that it is not by sword or spear that the Lord saves! For the battle is the Lord’s, and He will deliver you into our hand.”  –1 Samuel 17:45-47

This epic and famous account epitomizes the courage of a mighty man of God. He was undeterred by the surrounding cowardly company (v.11), the false accusations (v.28), the insurmountable odds that stood before him (vv.4-7), and perhaps even his own previous retreat (v.24). He was confident in his past experience (v.35), his current equipment (vv.39-40), and God’s future protection (v.36). And, he was rightly motivated by the reward promised by his king (vv.24-26).

Yet I have missed an invaluable purpose in David’s victory… and my own.

Not “my hand,” but rather “our hand.” Even though David went out to face Goliath alone, there was an army at his back that would share in the victory and give chase to the enemy (v.52) once God removed the one obstacle that paralyzed His people (v.11).

The obstacle for Israel here was not a physical giant, but rather a lack of faith. David killed Goliath and God was glorified. Then Israel’s eyes were opened to see the truth (2Kings 6:17)—that the battle was already won (v.51). And so they were filled with faith and surged forward into battle (v.52).

Goliath’s size was never an issue, and neither is the size of any mountain that stands in our way (Matthew 17:20). Because victory is not ultimately about conquering “the enemy.” The Devil is no match for our Sovereign God; Satan’s future demise is certain (Revelation 20:10). There will be a day when Jesus will annihilate His enemies with a single word (Revelation 19:21), and He could do so this very instant if He so decided.

Rather, we see that God patiently tolerates (even uses) evil and injustice in order to conquer something else—our hearts (2 Peter 3:9). THIS is why it is so important that we live in Christian community, open and vulnerable before others (v.26, 40, 48) so that they can see God’s power manifested in our lives. God’s desire is for His people to rise up in faith… TOGETHER. And that can’t be done with lone crusaders just looking to pick a fight. Instead, God purposely calls out the weak (1Corinthians 1:27) so that He is assured the glory (which rightfully belongs to Him, Romans 11:36), and so that brothers and sisters watching, and listening will have their hearts filled with faith.

Mighty men of God, we are being called forth to openly call out and lead others—both in word (v.26) and in deed (v.48). So, let us courageously rush toward giants so that true victory can be attained. Not the beheading of giants with their own sword (v.51), but the rousing of faith in the army behind us so that we all charge forward (v.52) for the sake of our King—Not Saul (or any sinful man), but Jesus Christ: “The King of kings and Lord of lords” (Revelation 19:16).