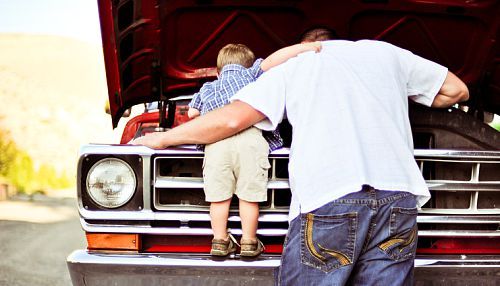 Sunday afternoon after lunch, my oldest son Elijah emerged from the house with his basketball, still in his church attire—a blue polo shirt and khaki shorts.

Standing by my Toyota Camry with my hands crossed, the car jacked up, two tires off, and the problem of a seized rear brake drum before me, I looked up and called out, “Hey buddy, Go back in and put some grubby clothes on. Why don’t you come and help me.” After all, I was soon in need of a foot to depress a brake pedal when I would be draining the brake fluid.

He returned to the house, emerging a few minutes later garbed in his usual athletic gear. He stood nearby, but quickly lost interest after a few minutes. He spotted his bright green soccer ball that he had kicked up in a tree a week prior. So he left me and turned to a more entertaining task.

Truth be known, if he hadn’t been grounded, he would have already found himself over a friend’s house.

“They don’t want me,” she said, relaying the upsetting details of the rejection she faced. Apparently the brother of the sibling pair she went to visit opened the door only to question her about Elijah’s whereabouts. When discovering he wasn’t coming, he told her to go “play at home.”

Unfazed at my answer, she parked her bike in the driveway and dismounted. “They won’t accept me without Elijah,” she pouted.

“I accept you. Come sit with me while I work,” I called out as she marched through the garage and into the house.

A few minutes later I walked up to the garage to get another tool. My youngest Joshua was coming out of the house, still in his pajamas. He had stayed home from church with his mother after he had run a slight fever the night before. We had come home from church to find him sitting in his tiny recliner, drawing. But by this point, he seemed to have returned to normal.

“Can I help you, Daddy?” He asked in his sweet, six-year-old voice.

I smiled, “You sure can. Just go in and change your clothes and put on a jacket.” He ran back inside. I got my tool from the workbench and returned to work.

A few minutes later, Aubrey came back outside and hopped on her bike to try again, hoping this time the older sister would be the one to answer the door and let her in to play.

“I’m ready, Daddy,” Little J said as he stood by my side, now in a more weather appropriate ensemble. He was prepared and content for whatever simple task I had for him (like pressing a brake pedal or hand tightening lug nuts), or to just crouch down and watch, a stuffed sloth under each arm, while his father labored at the repair.

And it was in that moment that the Lord spoke to me: Sometimes all the Father wants is to have His children by His side as He works.

Tears began to fill my eyes as I contemplated the thought.

How it must break God’s heart to have His children so caught up in the fickle approval of others when the Father’s waiting with open arms of unconditional love and acceptance. And how sad that we are so easily distracted away from His side by colorful distractions and silly challenges that the world offers us. But what joy it must bring our Heavenly Father when his children leave the comforts of this world (like comfy pajamas and a warm recliner) just to be by His side.

May I always chose the better thing (Luk 10:42), and be ever delighted just to be in His presence (Psa 16:11). May I value my relationship with Him over any blessings that He can give (Luk 15:28-31). May I never see the time spent honoring Him as a waste (Mar 14:4). May I only seek to go where His presence will be (Exo 33:15). May I be a treasured son that wants nothing more than to be at his Daddy’s feet, watching Him at work.