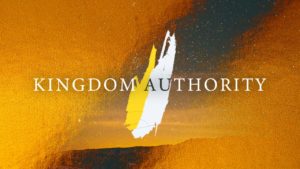 Then He commanded the multitudes to sit down on the grass. And He took the five loaves and the two fish, and looking up to heaven, He blessed and broke and gave the loaves to the disciples; and the disciples gave to the multitudes. — Matthew 14:19 NKJV

Men, Jesus tells the disciples “bring them to me” (the fish and loaves). Then He tells all the multitude to “sit down on the grass”. Then He took the five loaves and two fish in His hands, looked up to heaven, and blessed them. He broke them up, gave them to the disciples to distribute to the multitude.

Who did Jesus bless the loaves by? Jesus could turn stones into bread if He wanted to, but He was following a Kingdom protocol. The earthly body is unable to break the general rules of physics. But the Spirit can. Jesus is showing us how to access the riches of heaven. Healing, signs and wonders are often thought of in terms of magic, or some hocus pocus. For Jesus, this was no sleight of hand; He was generating a legitimate increase in physical resources, but not by some incantation and wave of a wand. From earth, Jesus accessed the literal Kingdom of heaven and by blessing it appropriately, the stores of Heaven were opened up to Him.

We’d all like to know the words Jesus used so we could follow a 5 step plan to fill our kitchens. Again, this is not about reciting an incantation, “bippity boppity boo”, so to speak. It’s not about the words Jesus used. His ability to break the rules we live by on earth are because of His focus on His own authority, Kingdom’s riches and freedoms.

Jesus was not limited to the rules here because His authority was secured in a higher order. Looking up to heaven, He acknowledged the authority He had in His Father’s Kingdom and opened the resources. To Him, it was as simple as opening a cupboard door. Is this authority available to others? 2 Kings 4 tells us about Elisha stretching a widow’s resources. The disciples called on healing power by Jesus name in Heaven. Is it available to us?

I dare anyone to move forward. It’s not a parlor trick for amusing our friends but Jesus said we would do even greater. How does it happen? It doesn’t without first looking up to heaven and acknowledging His Name’s authority, our sonship and His Kingdom.