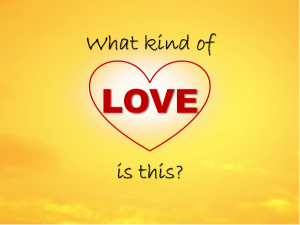 Behold what manner of love the Father has bestowed on us, that we should be called children of God! Therefore the world does not know us, because it did not know Him. Beloved, now we are children of God; and it has not yet been revealed what we shall be, but we know that when He is revealed, we shall be like Him, for we shall see Him as He is. And everyone who has this hope in Him purifies himself, just as He is pure. 1 John 3:1-3 NKJV

John asks, “What kind of love is this? That we would be called God the Father’s children.” As we belong to Him, the world no longer knows us. As we come into alignment with Him, the world understands us less because the world doesn’t know Him. As the Father’s children, we don’t know what we will become as life continues in Him. We do know that we will be like Him, but it is not yet revealed. When it is revealed, we will be like Him and see Him finally, just as He is, in His glory.

We have this idea that the process is harsh or abstract. The Father calls us His children. Bad teaching gives us a bad picture of who He is. He is a loving Father, and gentle with us. More so when we walk according to His leading. He exalts the humble, and humbles the proud. Would a good man set his children up for failure or success? Would he offer gentle and understanding correction, or allow his child to walk in error and deceit? Wouldn’t he pour out his heart and his best on his child when they come to him with their struggles, hopes, and questions? The Father of all creation is a Good Father who welcomes us as His children. He picks us up when we fall. He doesn’t wait with lightning bolts in hand like darts. He teaches and leads His attentive children and showers them with favor, though that rarely means wealth.

We have a very real enemy, and He stands watch only allowing the enemy to test us in ways He approves of for our growth. Yes, we learn and grow in struggle, and He strategically allows us to hurt. Move forward men, as children growing with the Father.