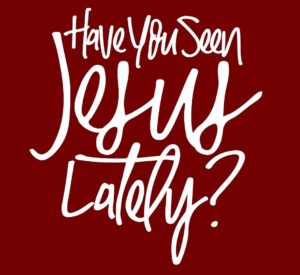 Then I looked, and behold, a whirlwind was coming out of the north, a great cloud with raging fire engulfing itself; and brightness was all around it and radiating out of its midst like the color of amber, out of the midst of the fire. Also from within it came the likeness of four living creatures. And this was their appearance: they had the likeness of a man. Each one had four faces, and each one had four wings. Their legs were straight, and the soles of their feet were like the soles of calves’ feet. They sparkled like the color of burnished bronze. The hands of a man were under their wings on their four sides; and each of the four had faces and wings. Their wings touched one another. The creatures did not turn when they went, but each one went straight forward.

Men, it takes the rest of the chapter for Ezekiel to express what he saw as the Lord approached him at the Chebar River while a captive in Babylonia. Repeatedly he uses the words “likeness of” as he struggles to express the wonder of what he saw.

A whirlwind of raging fire approached Ezekiel, and in it where 4 winged creatures, each over a wheel inside a wheel, and each wheel had eyes all around it. Each winged creature had 4 faces, 4 wings and their appearance was like burning fire. Above them was a crystal like form of platform. On the platform was a throne like sapphire stone and something like a man sat upon it. As the Spirit inclined, the wheels and winged creatures moved and it made a noise like rushing waters, or of the Almighty, or of a marching army. The man upon the Throne shone with the color of amber from His waist up, and from the waist down He appeared to be of fire and a great radiance like that of rainbows was all around Him.

Ezekiel fumbles for words to express an inexpressible wonder of power, glory, radiance, and awe as the Lord of Heaven came to earth to meet with him in His vision. A.W. Tozer wrote in “Knowledge of the Holy”, “What comes to mind when we think about God, is the most important thing about us.”

Ezekiel had been taught about God in preparation to serve as priest his whole life until the captivity. But nothing could prepare him for what He saw and experienced. Every preconception, ever traditional interpretation, every teaching about His likeness fell flat. Whatever pursuit he had for God, through His Word and in service fell flat. At once, Ezekiel was reduced to awe struck, paralyzing, sensory overload.

Jesus said, “to see Me is to see the Father”. So we have to ask, have we really “seen” Jesus? We see Him in pieces, but if we ever saw Him in the form of His glory as Ezekiel has, what would we then think of God?

Move forward men, questioning the insufficiency and error of our thoughts about the Most High.