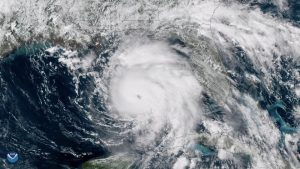 The named storms of this life can gain notoriety status. Hurricane Michael struck the people of Western Florida and S. AL and GA this week, with relatively little warning as storms go, and with a vengeance rarely encountered on the Gulf Coast.  On Saturday prior, the threat was almost unknown. On Wednesday afternoon the Cat 4 storm slammed Panama City with winds near 155 mph causing massive damage. Michael will not soon be forgotten by those that lost their home or business in the region. Similarly, Hurricane Florence that struck the east coast in September 2018 will be a named storm that many in Eastern NC will remember for the flooding destruction for decades to come. Hurricane Harvey in Texas in 2017 will have similar reputation. Collectively we remember the named storms.

But what about the unnamed personal storms? In my life I will always remember the personal financial crisis that impacted my family in 1998. Similarly, I will remember the business crunch crisis that we faced in 2001 after the attack of 9/11 brought the private sector to a halt for a time. I will never forget the land condemnation of 2007. I remember the personal questions of purpose and further and final surrender to the Lord in 2008 and the clarity and joy that followed. I remember the vicious attack of brain cancer that took my father-in-law in less than 3 months in 2016. I will always remember the quick and passing storm of depression that attacked my family in February of 2018, coming for a three week period with no warning but leaving as quick as it came once fully recognized. Life is full of attacks and storms. The stealth and the speed and even the source of the attack will surprise us many times, but the existence of the attack should never surprise us.

In John 16:33, Jesus said clearly, “In this world you will have trouble, but take heart, for I have overcome the world.” This Truth gives us great comfort as we face the named and unnamed storms. And, the worst storms of life do have their positive result. In James 1:2-4, the Bible says, “Consider it pure joy, my brothers and sisters, when you face trials of many kinds for you know that the testing of your faith produces perseverance. Let perseverance finish its work so that you may be mature and complete, not lacking anything.”  Sometimes the storms seem more than we can bear, but it is times such as this that Jesus can stand up in our boat.  Mark 8:24-27 reads, “Suddenly a furious storm came up on the lake, so that the waves swept over the boat. But Jesus was sleeping. The disciples went and woke Him, saying, “Lord, save us! We’re going to drown!”   He replied, “You of little faith, why are you so afraid?” Then He got up and rebuked the winds and the waves, and it was completely calm.  The men were amazed and asked, “What kind of man is this? Even the winds and the waves obey Him!”   If you find yourself in a storm, named or unnamed today, take heart, for even today, He is still capable of calling down the winds and waves in your life.

3 thoughts on “The Named and Unnamed Storms of Life”