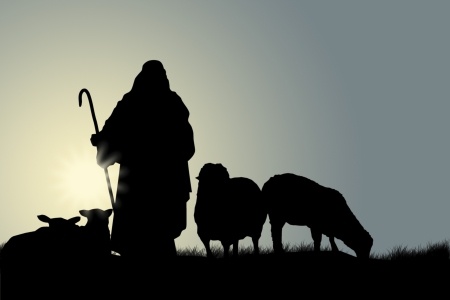 ‘For thus says the Lord God: “Indeed I Myself will search for My sheep and seek them out. As a shepherd seeks out his flock on the day he is among his scattered sheep, so will I seek out My sheep and deliver them from all the places where they were scattered on a cloudy and dark day. And I will bring them out from the peoples and gather them from the countries, and will bring them to their own land; I will feed them on the mountains of Israel, in the valleys and in all the inhabited places of the country. I will feed them in good pasture, and their fold shall be on the high mountains of Israel. There they shall lie down in a good fold and feed in rich pasture on the mountains of Israel. I will feed My flock, and I will make them lie down,” says the Lord God. “I will seek what was lost and bring back what was driven away, bind up the broken and strengthen what was sick; but I will destroy the fat and the strong, and feed them in judgment.”
— Ezekiel 34:11-16, NKJV

Men, the Lord has turned His attention to the failed shepherds of Israel who allowed the sheep to go astray and be scattered. The Lord here promises to seek out His scattered sheep and deliver them from the places they’d scattered into in the “dark and cloudy days” (v12), speaking of the siege which they had survived. The Lord will bring them back to their own land and feed them on the mountains and valleys of Israel. In their homeland, given to them by God, Israel will feed on good pastures. The Lord Himself will regather the lost, bind up the broken, and strengthen the sick, but He will judge the fat and the strong.

In today’s time, obesity is driven by inactivity. In those days, obesity came by abusing power, exploiting the underprivileged. Many “shepherds” or leaders, of that time had deserted truth and the heart of their positions for personal gain. We can liken the fat of their time to rich politicians of today. How does someone in politics, earning 150k become a millionaire in 3 years? The same way religious shepherds get fat with no crops or cattle of their own, by selling out their responsibility to lobbyists and special interest groups.

It would be irresponsible to draw conclusion for how God might act tomorrow by this passage alone, but we can say with certainty that God is aware of all injustice. Though the people have endured much in the past months of their captivity, the Lord promises a healing and strengthening.

Today, Jesus offers us that same opportunity to be healed and strengthened. Though much of the healing and strengthening comes in ways hard to recognize, He is faithful. Will we endure our time of captivity waiting on the Lord to act? Will we blame each other? Will we fight among ourselves? Will we recognize when God finally does regather our strength?

Move forward men, receiving the hope promised to our time as Israel waited on the promises to their time. As then, our time has much to repent from and a Lord who renews.