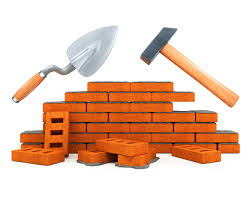 American history is full of legend­­ary men who built things.  Henry Ford built cars.  Cornelius Vanderbilt built railroads. Patton and Eisenhower built military ‘machines’.  Their efforts created physical and business and military entities that still have strong lasting impact today, 80 to 200 years later.  All of these men had vision and resolve and the vision and resolve were supported by brains, brawn, and balls.  Men are powerful creatures.  Created in the image of God, we have inherent capabilities for greatness; abilities to think, reason, imagine, dream, work, battle and persist under trial.  When we do, things are built.

Our Christian heritage is also built on and through men of vision and strong will.  Their vision and resolve were empowered by male strengths as well, but their true strength was in their faith in a sovereign, active and personal God.  When the physical and mental capabilities are coupled with spiritual understanding and Kingdom-based faith, the impact is beyond the physical and temporal, i.e. eternal edification is the result.

Consider Abraham, a capable man who with God’s blessing flourished in the livestock business in the land of Canaan (Genesis 12).   No doubt the other men in the region saw and marveled at his increasing territory footprint in such a short time.  But it is highly probable that almost none of them had a clue about the true depth of what was being established.  Did Abraham?  Yes.  God works through humble (powerful but yielded) men and does amazing things.  And He tells them what he is doing.  He often even makes deals or one-sided promises with them.  I say one-side because only God can carry through on a promise. As men, we cannot guarantee the actions of the coming evening in the morning.  Our side of the deal is belief, a choice to serve, and the faith to endure.  Not an immaterial contribution, just absolutely nothing in comparison to the strength and consistency of Jehovah God.  With Abraham, he saw and acknowledged the active blessing of the Lord, and he believed and acted on his faith.

King David knew of the God of Abraham, Issac, and Jacob, and he believed and displayed an active faith at a young age, killing the lion, the bear, and Goliath (1 Samuel 17).  Who could forget the battle cry of that would establish his rise in notoriety and legend, “You can come against me with sword and spear and javelin, but I come to you in the name of the Lord of Heaven’s armies, the God of the armies of Israel, whom you have defiled.”  After this shout David proceeded to separate the giant Goliath’s head from his body.  Here and in the years following we see David’s established faith exercised.  Though David, God would establish Jerusalem and create a House of Grace from which Jesus the Messiah would emerge hundreds of years later.  Again, great and promised plans moved forward through a great (humble and full of faith) man surrendered to a great God.

Consider Peter, a mere fisherman whose faith goes from just budding to rock-strong in a three year period.  This faithful fisherman would be the man on which Jesus would build the church of Acts.  Consider Paul, a former persecutor of the church of Acts, who would meet Jesus in a life-changing encounter and go on in obedience and write letters that would expound on the operational truths of a new and expanding church for the next 2000 years.

Abraham, David, Peter and Paul…these were not sissy men who rode tabernacle pews on Sundays and faked religious authenticity on Mondays.  These were strong non-neutered men’s men who fought through physical, mental, and spiritual attacks to contribute to the building of a coming eternal Kingdom.

God is still working through men of faith today to build the Kingdom.  While almost none surrounding them have any idea of the promises made, humble men hear the Lord and respond with faith.  The Lord reveals his steps to his men and the Kingdom advances.   Let’s humble ourselves, hear, and believe.  The result will be an eternal edification.