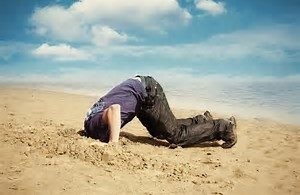 Is the Christian to fear the culture he or she lives in? Abortion, LGBTQ, Atheism, and a host of other worldviews flood today’s marketplace as a substitute to replace the nation’s Judaeo-Christian heritage worldview. In the case that you have been asleep for the past thirty years, the transition from religious to secular has already taken place.

As modernity has shifted to post-modernity and the nation has shifted from Christian to post-Christian, I encounter many believers who stand between the times and are confused as to what to do. Really, these believers should not have been caught off-guard, but that’s another article I do not have time to write. What is important is that we do help the Christians who have repented of their ignorance and are genuinely seeking guidance in how they are to live for Christ now. To the believer who desires to keep his ostrich head stuck in the sand, I cannot help you out at this time.

Has secularism won the day? Has postmodernism painted a picture as a point of no return – as a worldview that has finally defeated Christianity? Has religious pluralism gone as far in tolerance to now eclipse intolerant Christianity? NO, NO, NO!

From a worldly perspective and a judgment based off of the numbers, the secularist would say YES. But as Christ-followers, we know and understand a kingdom perspective that reveals time from beginning to end. At the end of the day, every knee will bow and every tongue will confess Jesus as Lord (Philippians 2:10-11). But that fact still doesn’t answer how we confront postmodernism today.

Brothers and sisters in Christ, we must not only confront postmodernism, we must expose it. It seems almost impossible from the start. I mean, how do you share meaning with someone who doesn’t believe that meaning exists. How can you help someone who does not believe in absolute truth and defines their own right and wrong? How do you take the self-absorbed and self-centered individual to a place where he or she admits there is a God and they are accountable to Him? Obviously, postmodernism does not make sense and is not rational (why modernity has passed), but this of course, is exactly why the postmodern embraces his worldview. We all remember tv shows in the 90’s like Seinfeld which were popular because they were shows about nothing. Exposing the emptiness in postmodernism is not enough. The emptiness is what attracts the postmodern to his or her view and to watch his or her show (its OK to watch Seinfeld, but to the ignorant, that show is now 25 years old). Postmodernism did not occur overnight. It was a process and it is not going away anytime soon.

But, ahhhhhh, maybe we are on to something (Read my last sentence carefully). Postmodernism will not last forever. It will eventually run its course and there will be a new worldview to overtake it as much as it has overtaken modernity. For the postmodern, culture becomes his enemy. Why? Because he or she can never escape it. Even if you dwindle all future cultures to a culture of the self, you still have a culture. Culture reveals a Creator. Though the naturalist would deny this Creator, the naturalist cannot escape the creation or the culture that he is in. Though he has placed himself above God, his sin (he will not use this word, perhaps “crime” or “disease” in this therapeutic culture) keeps creeping up. With moral standards all but gone, he cannot but think a lot about himself and a lot of himself. Though he denies moral reality, the image of God within him keeps telling him he was created as a moral agent. It is at this point that creation becomes the gospel’s ally. Fallen postmodern man in denial of moral reality has not found a way to live comfortably and still yearns spiritually for something more. In short, he cannot save himself or find the means to salvation within himself.

Here are some helpful quotes from David Wells in Losing Our Virtue:

“We are, as a result, caught. We are condemned forever to the jarring uncertainties that come from being morally and spiritually out of step with who we are by creation. The more we sin, the greater the contradiction with what we are in the image of God; . . . It is this frustration, I believe, that gives Christian faith its best access to a postmodern culture that has given up on serious thought, rational argument, and historical defenses.” – p. 192

“Our postmodern spiritual disjunctions, our inward contradictions, on which we place such a morally neutered assessment, can be the very hand that leads us to God, because they lead us back into moral reality.” – p. 193

“We cannot elude our own moral nature or its corruption. We know ourselves to be moral agents, but there is always a residue of moral unease when the day is done. Our experience is thus shot through with ambiguity. Spates of pleasure-seeking are followed by seasons of regret; well-meaning actions, by those that are malicious, vindictive, or craven; hope in our ability to take hold of life in good ways, by despair that we have not succeeded in doing so. We party on Saturday and repent on Sunday. This tangle of contradictions we are unable to untangle because of both the power of sin and the intent of God. It is this inability that points us back, even in our advanced post-modernity, to the Cross, because there simply is no other place of resolution.

If, then, we, in this generation have lost our ability to name sin – and we have – we have nevertheless not lost our sin. We may call it by other names, we may not recognize it at all, and we always misinterpret it. Our moral radar is defunct. And yet, moral reality keeps intruding into our experience; the threads of moral existence are ever present. It is thus that creation is the great ally of the Gospel, while culture and fallen self are its great enemies. This is the awful contradiction that cuts through all of life, and it offers the most telling entrée for the Gospel into the postmodern soul.” – p. 196

Forgive me if I sound harsh to the ostrich, but David wrote this in 1998, a century ago (you know what I mean, “last century”). Wake up ostrich, one-hundred years is no different than nineteen if your head is in the sand.