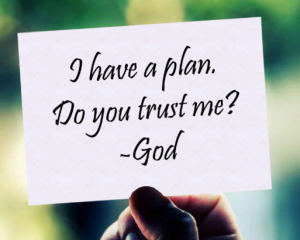 When my daughter was in 1st grade, my son was still a year away from starting school. We lived in Southern Pine, NC which had a great quaint downtown shopping area and a regionally famous breakfast restaurant called ‘Mac’s Breakfast Anytime’.  My wife would drop my daughter off at school downtown and she and my son Landon would have the day together until they picked up Beth again at 3 pm, often including a morning walk in the ‘Village’ and breakfast at ‘Mac’s”. Every day was an adventure to Landon and I will never forget my four-year-old saying, every day with enthusiasm, “Mom (or Dad), what’s the Plan, What’s the Plan?!” Those days as a young family living out ‘the plan’ were so sweet. Inherently, as humans and Christians, we want to know the Plan. This is built into us. God’s Plan is the real ‘big-picture’ Plan for not only Christians but all people. The Bible delivers God’s plan thoroughly, starting with the initiation at creation in Genesis 1 and culminating with His delivered end-goal in Revelation 22. Understanding the plan is pivotal to God’s people understanding the offering of God’s love and their place in His Kingdom:

In the beginning God created the heavens and the earth. It included land and sea, dark and light, plants and animals, and man and woman.  God spoke this creation into existence, saying “Let there be light, etc.” Jesus, God’s faithful Son, assisted God the Father from the very beginning. Speaking of Jesus, John 1:1-3 tells us that, “In the beginning was the Word, and the Word was with God, and the Word was God. He was with God in the beginning. Through him all things were made; without him nothing was made that has been made.’ At the completion of a six-day creation project God declared that “It was good.” The necessary beginning of the Plan was in place and it was set up well for His purposes.

In a simple phrase, God’s plan or purpose, as revealed clearly throughout the Bible, is “God with Man”. The depth of the plan, however, is detailed. The real goal is Holy God together with a man with free will and purged of sin. A man who sees, acknowledges, and worships a Holy and deserving God. For free will and holiness to exist there must be choice and so in the Garden, God provides a people made in His image, physical beings, but with a spiritual side like God. We also see knowledge of the mysteries of God represented in the tree of knowledge. To this mix, God adds Satan the deceiver, representing the opposite of Holiness, an anti-Christ option and thus the first man and woman, from the beginning, must choose to trust and believe God, who is good, or Satan, who is evil.  God designed and framed the environment, the players, and the choice, and “it was good.” Satan’s initial lie is cast, fallen and sinful man emerges, and through one man Adam, the seed of sin is planted in mankind’s flesh forever, and the choice or free will of man is established for all men to come.

A Holy God cannot directly mix with a fallen man; if tainted with sin, He would not be Holy. So fallen man is removed from the Garden, but even so a promise or covenant is made through Abraham (Genesis 22:17-18) and a vision is planted of a future great city (Hebrews 11:10), i.e. a restoration of God the Father with a redeemed man. In Abraham, faith is established as the key to righteousness or redemption. The Law is put in place through Moses’ delivery of the commandments and absolute clarity of man’s sin is established by that Law. God’s stiff-necked and restless people cry out for a man to lead them versus God and God gives them what they want in the first of many kings in King Saul. God’s early plan for grace is demonstrated through David and a sacrifice for our sin, even indeed a new covenant and kingdom, is prophesied to rise from King David’s line. Fast forward and Immanuel, meaning ‘God with us’ is born under miraculous means in Bethlehem, out of David’s line (called the ‘root of David’; Revelation 22:16) and He is called Jesus. Jesus, the Word from John 1:1, arrived to walk among men, becoming the first Son of Man, with a purpose of 1) delivering God’s word to men, 2) being the sacrifice for our sins, 3) ushering in His spiritual kingdom, and 4) inviting all men to the planned outcome, i.e. Holy God joined with a redeemed, free-will man. Jesus’s teaching is completed and then He does what God the Father could not do directly, when He takes the sin of man on His shoulders and becomes, the great sacrifice for all (1 Timothy 2:5). Jesus dies a horrible death on the cross and when complete, notes that “It is finished” and He releases His spirit and His body dies. Sin, Hell, and the grave are then defeated in His resurrection and Jesus returns to the Father to complete the preparation of a place for the kingdom of men and women who would choose God over Satan.

Peter and the other disciples, obedient and empowered by the Holy Spirit on the Day of Pentecost, launch the preaching of Jesus’s kingdom and 3000 are added to the first church on the first day. Sharing and believing and serving together the church grows quickly. After a dramatic Damascus Road experience (Acts 9:3-6), Jesus launches the Apostle Paul on a task to include the Gentiles, along with the Jewish people, in the kingdom invitation.

Much time has elapsed since the initiation of the first church and just now perhaps the greatest prophesied sign, the restoration of Israel and the completion of a 70-year generation has been completed and celebrated this year. God’s plan, as delivered through John in the book of Revelation and supported by various Old Testament prophets and New Testament apostles calls for a remaining return of Jesus, a reign of Jesus, a judgement and destruction of evil. This is followed by the completion of God the Father’s plan where God delivers a New Heaven and New earth, basically a new perfect order of things and God and a redeemed man are together. Here, the believers who have chosen God (and therefore Good) will be with God. In Revelation, it says that God will then declare that “It is finished”, i.e. His plan is fulfilled.

Can you see God’s plan? The beautiful creation, the use of Satan for free will, the early Promise to Abraham and his great faith, the sacrifice and work of Jesus, and the prophesied completion of God with Man? As God’s children, it really is good to know the plan for the Day — what an adventure. In Part 2, we will discuss Jesus’s great service to God the Father. There truly could be no greater Son.