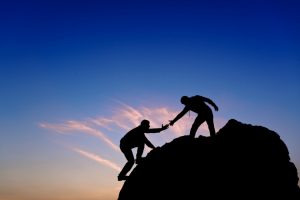 Three words, “God with Man”, describe God’s desired end game well; a Holy loving God living with His redeemed people.  If only given one word for God’s plan, it would be “Immanuel” meaning God with us.  Jesus, as we more commonly refer to Immanuel, was God’s Word (John 1:1) to us.  In His modeled, surrendered state, He is God the Father’s will and He is literally God the Father’s work (viewed in His part at creation; in the ‘works of God’ on earth; in interceding for us even now; in preparing a place for us; and on and on). He is the Word, the Will, the Work, the Way, the Truth, the Resurrection and the Life.  In a word, ‘Jesus’ is the plan for a righteous, free-willed people to be with God in a restored order (Revelations 21-22).

This was revealed in great depth to the Apostle Paul who worded it this way in 2 Corinthians 1:20, “For no matter how many promises God has made, they are ‘Yes’ in Christ”. God spoke many promises to men, and all of them are proved true, or are “Yes”, in Jesus.  Numbers 23:19 says, “God is not human, that He should lie, not a human being, that He should change His mind.  Does He speak and then not act? Does He promise and not fulfill? God’s word is solid, unchanging, and carried out – through Christ and through Christ obedient followers, empowered by the Holy Spirit.

If space were not an issue (the Bible couldn’t hold all there was to say of Him and this devotional sure won’t) we could consider Christ’s contributions of teaching of truth, performing of miracles, one sacrifice for all sin, defeat of death and the grave, afterlife place preparation, intercession, and then the pending promises of return, justice, and reign.  But with space being limited, let’s tackle one that although it was so high on Jesus’s teaching topics, it is rarely described much in churches today in the way Jesus described it. Let’s consider His establishment of the kingdom.

In Matthew 3:2, we see John the Baptist speaking of Jesus saying, “Repent, for the kingdom of heaven has come near.”   In Matthew 4:17, Jesus repeats the very same saying personally. Both the forerunner John and the messiah Jesus, are fulfilling prophesy (Isaiah 40:3; Isiah 9:7) in their actions and statements. The kingdom has come into men’s presence.  A kingdom of which it says in Isaiah 9:7 whose ruler’s “greatness of His government and peace there will be no end.”

When asked by the Pharisees in Luke 17:20-21 when the kingdom would come, Jesus replied, “The coming of the kingdom of God is not something that can be observed, nor will people say, ‘Here it is,’ or ‘There it is,’ because the kingdom of God is in your midst.” Rather than something to be observed it is something to be found.  Matthew 6:33 says, “Seek ye first the kingdom of God and His righteousness and all these things will be added until you.” And when truly found, all material and worldly things will be forfeit before it.  In Matthew 44-46, Jesus shows us, “The kingdom of heaven is like treasure hidden in a field. When a man found it, he hid it again, and then in his joy went and sold all he had and bought that field. Again, the kingdom of heaven is like a merchant looking for fine pearls.  When he found one of great value, he went away and sold everything he had and bought it.”

While the spiritual kingdom is not physically observed, there is a great Kingdom Difference that can be realized; one worth a full change of life’s focus.  Consider the difference of kingdom salvation (John 3:16-18) versus eternal damnation.  Consider abundant kingdom life versus eternal death (John 10:10).  A worldly burden of guilt versus the kingdom’s religious liberty (Romans 8:1-2). Faith in God versus fear of man or circumstance (Hebrews 13:6). Trust versus anxiety or worry (Matthew 6:25-34).  Purposefulness versus aimlessness (Jeremiah 29:11).  Passion versus depression (Lamentations 3:22-24).  Assurance versus doubt (1 John 5:13).  Full knowledge versus ignorance (Colossians 2:2).  Peace versus turmoil (Isaiah 26:3).  Can you ‘see’ this kingdom worth trading all for?  ‘In Christ’ the kingdom is in your midst and present and a different lifestyle is possible.   Seek Him and His righteousness today.