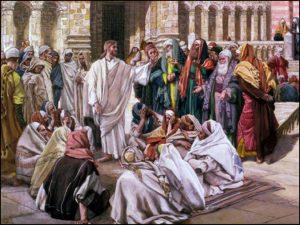 Jesus was a masterful communicator; the Master Teacher.  To say He spoke at another level would be an understatement.  But anything less would have been beneath His high purpose.  He came to earth to 1) reveal God and His grace to men, 2) be a sacrifice to cover men’s sins, 3) describe God and His Kingdom, its functioning and our part in it, and 4) offer God’s gift of salvation and Life to men.  Not a simple assignment and conventional simple minded communication would hardly have served the purpose.

As Christ’s men, our known assignments are often not simple either, and we would do well to learn from Jesus’s communication style.  Paying attention to what He spoke about, the level at which He addressed different people, the tone for the different groups, and the contrast with the existing establishment, could teach us a lot about how we should go about our Kingdom assignments.

Consider Jesus’s discussion with Nicodemus in John 3.  What was the topic?  “Ye must be born again.”  What was the level of depth?  Very deep, i.e. beyond the present understanding of the ruling Pharisee faction.  What was Jesus’s tone?  Graceful? No.  Direct? Yes.  Condemning? Yes.  Confrontational?  With Nicodemus?   No.  In regards to ‘conventional’ truth? Absolutely.  In regards to the religious establishment of the time?  Definitely.  Did Jesus cater to the establishment and work to try to convince the Pharisees or make them understand?  Absolutely not.  Did Jesus talk about politics, or taxation, or social injustice?  Or, in contrast, did he talk about Kingdom business?

Consider Jesus’s discussion with the woman at the well in John 4.  What was the topic?  Living water.  What was the level of depth of knowledge?  Deep, both from Jesus and a woman that knew her history.  What was Jesus’s tone?  Gracious? Yes, in contrast to the Pharisee discussion above.  Direct? Absolutely, to the point of telling her she had had 5 husbands.  Condemning? No.  Confrontational?  With the woman? No.  In regards to the established relationship boundaries between Jews and Samaritans? Yes.  In regards to conventional knowledge? Absolutely.  Did Jesus cater to the woman and work to explain the next level to her? Yes, in fact He spent several days there teaching.  Did Jesus talk about current policies and historical relationships? Or, did He talk about Kingdom business?

Consider Jesus’s discussion with Satan when tested in the desert in Mark 4.  What was the topic? Spiritual sustenance, self-preservation, and great power.  What was the level of depth?  Super deep, i.e. the jousting of two advanced spiritual representatives from the two competing realms of good and evil. What was Jesus’s tone? Graceful? Not quite.  Direct? Totally.  Condemning?  Not in word, only in the effect of His choices.  Confrontational?  At the highest level — eternal consequences.  Did Jesus cater to the established ruler of this earth?  No.  Did He talk about politics or taxes or the weather? Or did He continue to focus on His Kingdom assignment.

There are many other examples of Jesus talking to individuals in the Gospels and I encourage you to review them with this same line of thought, but just from these three examples, what do we ‘see’?   The focus of the topics was not on simple things of this world, but rather a strong focus on the things of His Father’s Kingdom and His personal assignment.   The level of depth?  Beyond conventional wisdom!  What about His tone?  It differed depending on who He was talking to.  For the humble woman with genuine interest, it was gracious and engaging.  For the religious establishment (man’s version) and Satan, it was direct and unapologetic, even directly condemning in regards to the truth.  What about His focus?  He had a Kingdom and assignment focus that was strong and consistent.   What did He NOT talk about?  The petty things of this world that do not last.

What is the application?  We walk in the same world with similar tasking (other than the sacrifice for sins, which only Jesus could accomplish, and it is done).   Just like conventional wisdom and communication were not fitting for Jesus’s task, they are not fitting for our calling.  Thankfully we have access to the written Word and the Holy Spirit.  Consider your communication methods.  How do they compare?  Are you gracious to the humble?  Are you direct and strong for truth in all cases?  Are you about your Father’s business, or do you get lost in the things of the world?