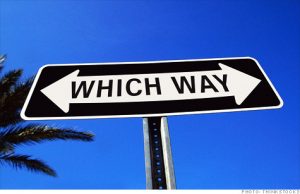 Which way do we go?  Or, where are we going?  This are typical, reoccurring, and important questions with different levels or scales.  Sometimes these questions are used fairly trivially, i.e. which way to the grocery store, or maybe the group is trying to make a decision on what to do on a Saturday night, etc.   In John 14:6, Jesus is at the highest level of this questioning.   He is talking about THE way, i.e. the Way to God and eternity with God.  And He is talking, like He often does, about a subject that can be applied at many scales, and can meet us where we are.

At the simplistic level, He is saying that He is the only way to have relationship with God the Father.  This is a great statement of Truth.  He says, “If you want to get to God, you have to come through Me”.   There is not another way by which men can be saved from their sin.

At another level, we realize that He not only is the portal to the Father in regards to salvation, but that our way to the Father is to follow Jesus in the Way that He lived and taught.  Simply put, the way that He modeled, shows us ‘our way’ to heaven.   Society asks, “What would Jesus do?”    When we look at what Jesus DID, we see ‘our way’.   What did He do?  In Philippians 2, it says, ‘He did not consider equality with God something to be used to His own advantage, rather, He made himself nothing by taking the very nature of a servant…He humbled himself by becoming obedient to death—even death on a cross!”

What is He asking us to do?  Take up our cross and follow Him.  Surrender our life to God.  Allow the Holy Spirit to mold our spirit into a new person, one that does what the Father asks and assigns us to do.  Our Way to heaven and the Father is to follow the Way that Jesus modeled.

At the 202 level, He modeled our way for us (demonstrated).

At a deeper level, He not only modeled it for us, but ‘our way’ is in Him.

He is our portal to God, He showed us how to live for God (surrendered) and He IS the Way.  We must share in His death if we want to share in His resurrection.  What does that look like?

In today’s American Church, men are often told that the Way is to say a sinner’s prayer, come to church faithfully, sit in a pew and listen respectfully, serve on a committee or maybe a teaching role, and help perpetuate the collective American Church of some denomination in a non-confrontational way.  Is this what Jesus did?  If Jesus were here now, what do you think He would do?   I think He would do what He did.  I think He would be who He is.  What did He do? He was a disciple of God, the Father (He said what He heard the Father say; He did what He saw the Father do).  He discipled others.  And He communicated spiritual Truths in a way and at a level that was amazing —- He was a Masterful Communicator.  What is our Way? It is Jesus and what He did.  Be a disciple.  Disciple others.  Through the power of the Holy Spirit, communicate the truths of God in a purposeful and masterful way.   This might not be passive, and it might not be non-confrontational.   But it is the Way, i.e. it is Jesus!