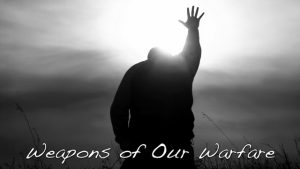 For though we walk in the flesh, we are not waging war according to the flesh. For the weapons of our warfare are not of the flesh but have divine power to destroy strongholds. We destroy arguments and every lofty opinion raised against the knowledge of God, and take every thought captive to obey Christ, being ready to punish every disobedience, when your obedience is complete. — 2 Corinthians 10:3-6, ESV

Men, Paul has been accused of walking in the flesh, well, he says he does walk in flesh but makes it clear that we do not wage war according to human standards. The weapons of our warfare aren’t conventional weapons. We have been given new weapons. Prayer, of course, is our primary weapon. I’ve recently found the value in fasting as well. We have some unlikely weapons found in kindness and mercy also. It may not seem like the most intimidating and ferocious way to fight, but, these weapons are made powerful by God. The power of God tears down strongholds, arguments, and all arrogant obstacles that raise up against the knowledge of God. With that power Paul, and we, have the power to take every thought captive, and to suppress our disobedient hearts so that we obey Christ.

Brothers, we should know by now, our most vicious fights are with ourselves. I do what I know is wrong even though I don’t want to and I often fail to do what is right, even with a desire to do so. How do we use worldly weapons in this struggle without destroying ourselves and others? As we surrender our lives to Christ, we should also surrender our weapons and tools. The Father gives us new weapons and tools when He gives us a new heart transformed by His Spirit. Move forward, men, submitting all things to Christ. Our old weapons won’t work in the fights the Father knows are coming. He equips for greater victory. Instead of returning insults in like manner, pray a blessing of peace over them. Instead of “knuckling up” try rebuking in Jesus’ name. The internet has an example of an old lady stopping an armed robbery by rebuking in His name. If we are surrendered fully to the Fathers leading, then the Spirit will tell us how to appropriately fight. Wield love.

Try it, it may work. It’ll work better with practice. This may be as new to you as it is me, perhaps just as odd, but I’m learning. I’m seeing it work. It’s unnatural but it’s powerful and constructive

One thought on “The Weapons of Our Warfare”