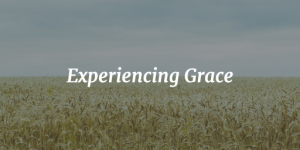 In Matthew 20:1-16, Jesus shares the parable of the Laborers with His disciples (the original twelve and subsequently with us). This parable is probably one of the clearer illustrations in the Bible of why we as God’s creation often don’t ‘experience’ grace. The workers portrayed here were all men who needed money to feed their families. They did not have regular jobs. We would call them day laborers.  If they did not work that day, they and their families would not eat that night. Luckily, there was a landowning employer (God) with work to be done who was willing to pay for their efforts.  In the passage, Jesus did not say why the landowner didn’t hire all of the men first thing in the morning, nor did he tell why the ones who were chosen later didn’t show up early in the day. What we do know is that this parable demonstrates how the beauty of the grace and mercy we experienced at salvation can fade as life happens.  At the point of salvation and Christ’s amazing grace (being hired) we are all excited and can’t wait to get into our new life (job) as a Christ Follower. Then life happens, and we work a little, and things just are not fair. It’s at this point that the glow of Christ’s amazing grace may begin to fade in our minds as we focus on the perceived blatant unfairness of this life.

In this parable we have five groups of men, including those hired at 6 am, 9 am, 12 am, 3 pm, and 6 pm.  All of the men were in need of somebody’s grace in order to feed their families. They had all agreed to a day’s pay for a day’s work, but based on what they thought of as a fair exchange. They all had worked their allotted time and would be able to go home and provide supper for their families. They had all received grace and mercy from the landowner.  But when pay time arrived, the first three groups who were hired were not happy. That sorry boss had the audacity to pay the lesser workers who hadn’t shown up and been hired until 3pm and 6pm, the same as those who had shown good character and made themselves available early in the day. Were they all going to be able to feed their families? Did they all get paid what they agreed to? Yes on both accounts. Then what was the problem?  Basic inherent greed and self-righteousness. They were not being treated fairly. They were better workers and deserved to be paid more than the sorry late comers!  What they were forgetting is that they had received the same grace as the last hired. The reality is that none of the workers deserved God’s grace! The last two groups of men went home with food for their families and rejoicing, knowing that they had received more than they deserved. The first three went home with food for their families grumbling, forgetting that they had also received more than they deserved. Forgetting that outside of being chosen by a very gracious landowner (God) they would be at home with nothing to feed their families.

The same can be true of us as today’s Christ followers if we, in any way shape or form, forget what Isaiah 64:6 says, that “All my righteousness is as filthy rags.”  If so, we miss ‘experiencing’ grace, because we will think we earned our ‘wages’.  If we think we earned grace, even subconsciously, the first time, we will most likely keep trying to earn grace.  This can lead to a life of fear and anxiety.  In contrast, we can live in the beautiful truth that when we surrender to the cleansing power of Christ’s blood (salvation) we are made righteous by His work, not our inadequate service.  We don’t have to get it right all the time and we don’t end up comparing ourselves to the worker next to us. Rather we fall on His mercy and work for Him out of love, truly appreciating what He has done for us that we could never do on our own, i.e. we got more than we deserved when we got Jesus.  What a place of peace and grace we end up in!!

One thought on “Experiencing Grace”